How To Make Funnel Cake: Our Comprehensive Guide 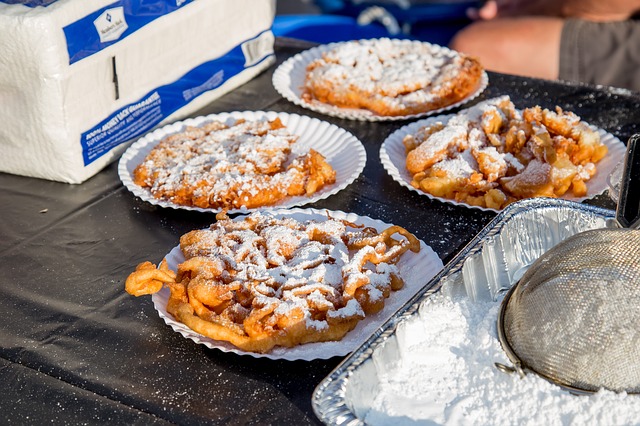 Once you learn how to make funnel cake, you will wonder why you haven’t been making it all the time. It is fast, easy, and delicious.

Growing up in Texas, some of my best childhood memories are associated with going to the state fair. The highlight of the Texas State Fair for many is the college football game between Texas and Oklahoma.

If you want to eat something fried, the state fair has it all — fried turkey legs, pickles, cheesecake, cookies, etc. However, funnel cake has always been my personal favorite state fair treat.

When it comes to tasty fried treats, there is nothing better than funnel cake. Whether you are strolling the boardwalk, visiting a carnival or the state fair, or at a ball game or concert, chances are the smell of fried dough is floating through the air.

Funnel cakes are made by pouring batter directly into hot oil in a circular pattern. The mixture is typically poured through a funnel, giving this delicious treat its name. Most vendors serve funnel cakes with powdered sugar. However, you can also find them served with chocolate, cinnamon, fresh fruit, or other toppings.

But where does funnel cake come from, and how did it get so popular? Like a lot of food history, the origins of funnel cake are not clear.

Culinary anthropologist Tori Avey explains that although funnel cakes seem “quintessentially American,” the origins of this dessert go back much further.

Funnel cakes first appeared in medieval cooking manuscripts under the name mincebek or nysebek. A basic recipe appears in the Middle English cookbook, “The Forme of Cury” (1390 A.D.). The origin of that name relates to the French phrase mis en bec, which translates to “put in spout” or funnel.

Medieval cooks prepared funnel cakes by pouring a yeast or sourdough batter through a bowl with a hole cut in the bottom. The resulting cakes were covered with sugar syrup and sprinkled with salt.

Funnel cake in the United States

Funnel cakes first appeared in Pennsylvania Dutch country in the United States during the 17th and 18th centuries. These early settlers called this dessert drechtr kuche, a variation of trichter, the German word for funnel.

These funnel cakes were one of the first North American fried foods, were immensely popular, and became a staple of the region’s cuisine.

However, it wasn’t until the 1950s that funnel cake really took off in popularity.

In 1950, a group of professors from Pennsylvania’s Franklin & Marshall College founded the annual Kutztown Folk Festival to celebrate the history of the Pennsylvania Dutch. One of the main attractions at the fair were funnel cakes, which sold for 25 cents.

Over 25,000 people attended the festival that first year. What began as a four-day celebration eventually grew to nine days. The festival now attracts well over 130,000 attendees.

This mass spike in attendance helped spread the popularity of funnel cakes. For this reason, you can now find funnel cakes from coast to coast at fairs and carnivals.

So how do you make funnel cake? Fortunately, making this delicious treat is easier than you might imagine. All you need is a good recipe and some basic kitchen equipment.

You will need a few specialty kitchen items to make funnel cakes that you may or may not already have.

First, you will need a dispenser for the batter. Sure, you can use a regular funnel. However, they are messy as they tend to drip all over the place.

If you are concerned about price, the best option is a plastic measuring cup equipped with an extended funnel spout. However, if you want something a little bit fancier, you might try using a stainless steel measuring cup. I prefer them because they are easy to clean and don’t yellow over time.

Cupcake and pancake batter dispensers are also great for making funnel cakes. And if you think you might go pro with your funnel cakes, commercial grade confectionary funnels are available.

Frying techniques can be as simple or complicated as you want to make them. However, if you want to learn how to make funnel cake leaving nothing to chance, a good kitchen thermometer is a must-have item.

Cooking in oil can be a tricky affair. If the oil is too hot, you run the risk of burning the outside of your funnel cake, while leaving the inside raw.

If the oil isn’t hot enough, you will end up with funnel cakes drenched in oil. That is not good for your waist or your heart.

Learning how to make funnel cake with the perfect coating of sugar is simple if you have a dredge. I have found that dunking a funnel cake is powdered sugar creates a sticky mess. At the same time, it is impossible to get an even coating using my fingers.

The best way to sugarcoat your funnel cake is to use a dredge, just like the professionals at the state fair and carnival. They are cheap, easy to use, and you get perfect results every time.

Next, you are going to need a pot or skillet to fry your funnel cakes. I prefer using a cast iron skillet. Cast iron retains heat, which means you don’t have to reheat the oil after cooking each funnel cake. If you prefer, However, another great option is an electric fryer. Best of all, most of them come with a temperature gauge, eliminating the need for a thermometer.

How to Make Funnel Cake — Techniques

Below are a couple of different methods of making funnel cake. Be sure to let us know your favorite technique in the comments below this article!

Basically what you do make a thin batter that is similar to that for cooking pancakes or waffles. Then, using a swirling or circular motion, you pour the batter into hot oil. Next, you fry it until it turns golden brown on the bottom side. Use a pair of tongs to check. Browning the first side should take about two to three minutes.

Then, place the funnel cake on some paper towels and let it sit for a couple of minutes. Then all you need to do is flip it over and let it drain for a few seconds on the other side.

Last, but not least, sprinkle the funnel cake with as much or as little powdered sugar as you like. Serve your funnel cake immediately. Funnel cakes are always best when served hot.

How to make funnel cake in the oven

If you are concerned about your fat intake, learning how to make funnel cake in the oven is a great option. Oven baked funnel cake requires a thick dough instead of a pourable batter, so look online for a proper recipe for baked funnel cake.

Once you have your recipe selected, you will preheat your oven to 400 degrees Fahrenheit. Once you prepare the dough, spoon it into a large resealable plastic bag. Next, take a pair of scissors and snip about a 1/2 inch hole in the corner of the bag.

Continuing, pipe the dough onto a non-stick baking sheet or one coated with cooking spray. Distribute the mixture using swirls or criss-cross patterns to resemble funnel cakes.

Next, you bake the funnel cakes for about 20 minutes until they are golden brown. Transfer them to a wire rack for a couple of minutes to cool down slightly. Sprinkle the cakes with powdered sugar and serve them warm.

It is easy to become overwhelmed by the sheer volume of recipes for funnel cake available online. Therefore, we will discuss some of our favorite recipes below.

We selected these recipes to give you a broad overview of how to make funnel cake at home.

To prepare this recipe, you will need flour, sugar, baking powder, salt, vanilla extract, eggs, milk, water, and powdered sugar. Once you experience the ease of making funnel cakes, you won’t be paying outrageous carnival prices for them ever again.

To prepare this recipe, you will need only five ingredients: flour, powdered sugar, baking powder, eggs, and milk. This recipe is one of the easiest funnel ones we found online.

To prepare this recipe, you will need flour, baking powder, salt, eggs, and milk. This recipe recommends you top your funnel cake with whipped cream, fresh fruit, powdered sugar, or chocolate fudge sauce.

To prepare this recipe, you will need flour, sugar, eggs, butter, salt, water, and powdered sugar. Once you learn the ease of making this healthy alternative to fried funnel cake, you likely won’t want to return to the fried version.

How to Make Funnel Cake — What We Learned Today

We hope you enjoyed our article detailing how to make funnel cake at home.

If you are like me, you have enjoyed funnel cakes for years. The mere smell of funnel cakes evokes grand memories of going to the state fair or carnival.

Once you learn how to make funnel cake, you can enjoy them at home year-round without the outrageous expense of paying for them at the state fair or carnivals.

Be sure to let tell us your own story about making funnel cakes in the comments, below.

Until then, happy eating!