Who doesn’t enjoy watching the show The Big Bang Theory? it certainly is a hit and it well liked by many viewers! Today, we are telling you how to make your very own Big Bang Theory cupcakes. 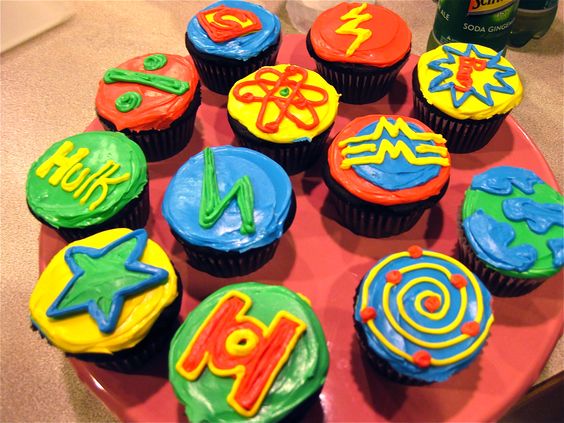 These cupcakes make a great addition to a watch party or even just a Big Bang Theory themed party. The Big Bang cupcakes featured today are cute and are simple to make.

Begin by preparing your cupcakes according to the directions on the box or the directions in your recipe. Bake the cupcakes and allow them to cool once they have finished cooking in your oven. While they are cooking, take your white icing and prepare your base icings in red, yellow, green, and blue.

After that, prepare your piping bags with red, yellow, green, and blue icing (respectively). Then, begin decorating your cupcakes by following the photograph shown above. On your blue based cupcakes you can make yellow rings with red dots as well as a green lightning symbol or a superman symbol. On your red bottomed cupcakes, you can make a division sign, a lightning bolt, and more.

These Big Bang theory cupcakes are fun to make because you can be as creative as you want.